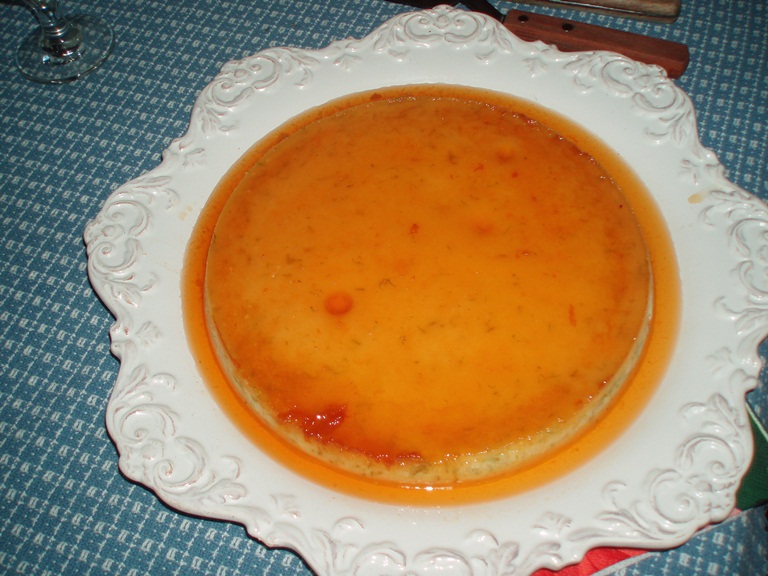 Flan, aka Crème Caramel has never been one of my favourite desserts. It's very common in Ecuador, but I rarely chose it. And I've never made it. Something about the whole caramelizing sugar technique kind of worried me. I thought it was beyond my capabilities. Dumb I know. And I prefer Crème Brulée, flan's cousin.

I watched an episode of Laura Calder, French Food at Home on line. Sadly, we do not have Food TV. Or maybe that's a good thing because I'd spend too much time in front of the television. Regardless....Laura made this flan using coconut milk. I was intrigued. Would the flavour be creamy and custardy? Would the coconut flavour dominate?

The family was here over Easter and I decided to give it a try. It was easy to make and yummy to eat. The coconut flavour was extremely mild and the lime zest added a fresh zing. This is one I'm putting in the files to make again. Laura Calder's recipe had a handful of coconut, toasted, I think, added in at the last, but I left that out, having some family members who are extremely texture sensitive.

Place in heavy bottomed small pot on medium high heat. Stir until mixture comes to a boil. Lower heat to medium. Watch carefully as mixture continues to bubble and turn golden-coloured. Don't turn your back or it will burn. Remove from heat and immediately pour into a metal pan - I used a cake pan, 8 or 9 inches. Allow to cool and harden, anywhere from 10 to 30 minutes.

Whisk together the eggs, sugar and coconut milk. Strain, then stir in the rum and lime zest. Pour custard mixture over the hardened caramelized sugar.

Place cake pan in a larger pan and pour boiling water up to about half way around the cake pan, taking care not to splash any water into the cake pan. Bake at 350 degrees for 40 minutes. Remove from oven, let cool, chill and turn out onto cake plate. The hardened caramel will have turned into a lovely syrup.

I thought it almost magical.
Posted by Lorrie at 5:35 PM

Oh can I eat the whole thing?

I am peeking out of my turtle shell to say thank you for your kindness and support. Be blessed dear one.

Sounds great; what size pan do you use for this?

It's so hard to find dessert for my gluten-free, dairy-free friends, but this fits the bill. Didn't have a suitable cake pan, so I made individual portions in ramkins. They're cooling on the counter. And was running short on time, so I left out the sugary bottom layer and I'll put a crisp creme brule finish on them before serving. I'll let you know how that works out.