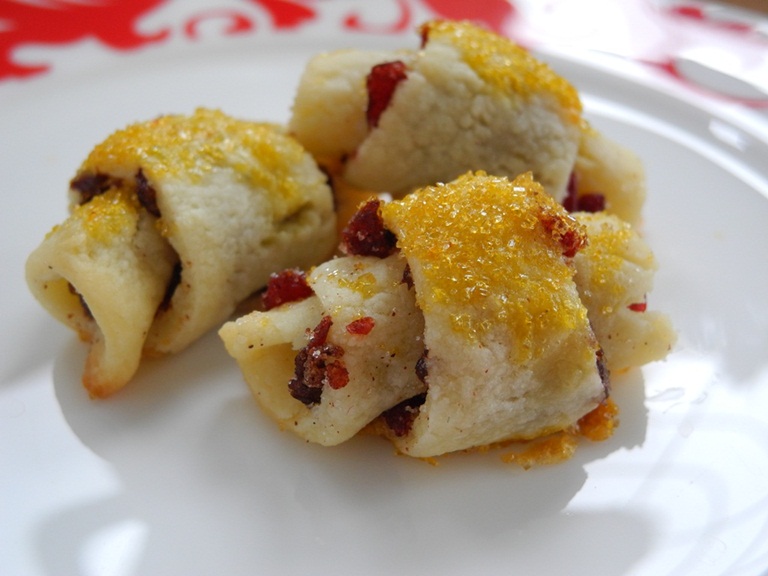 My sister gave me this recipe in 2006 (I know this because it's an email that I printed off). I've made it every year since. It's a favorite with my husband and son, and the girls like them too. They are not large, just 2 bites, but oh, so tasty.

An easy cream cheese pastry is sprinkled with sugar, dried raisins and cranberries and cinnamon, then rolled up, brushed with egg, and sprinkled with sugar. I used gold sanding sugar this year because I found some in my cupboard, but white sugar works just fine.

1 egg, for brushing, whisked to combine yolk and white
sugar for sprinkling

Place flour and icing sugar in a food processor. Mix. Add the butter and cream cheese to the flour mixture and pulse until dough starts to come together. It may take awhile, but be patient, it will turn into a lovely cohesive ball in time. Form into three balls, then flatten each into a disc. Wrap separately in plastic wrap (or parchment paper). Chill until firm, at least 30 minutes. The dough can be made ahead, but let it come to room temperature (cool) for better handling.

Chop the raisins and cranberries together, then combine with the sugar and cinnamon in the food processor. Pulse until chopped a little more, and all the fruit is covered with cinnamon sugar.

On a lightly floured counter, roll each disc into a 12 inch (approximate) circle. Sprinkle with one third of the fruit and sugar mixture. Pat gently into dough. Cut into pie shaped wedges, 12-16 per circle. A pizza-cutter works well for this. Roll each wedge, beginning from the wide end. Place, point down, on a parchment covered baking sheet.

Brush with egg, sprinkle with sugar. Bake at 350 degrees for 13-16 minutes, or until golden. These freeze well.
Posted by Lorrie at 4:11 PM

Sandy aka Doris the Great said...

My daughter and I have been making Rugelach every Christmas for about 15 years; it's her favorite Xmas cookie. We've used a variety of fillings (never cranberries and raisins though). Tomorrow is Rugelach (and gingerbread) day for us; we'll be doing peach jam and pecans ..... with clear sanding sugar.

Now I'm off to read some more of your lovely blog!

I love rugelach, yours look so good!

This would be my favorite cookie too. Anything made with pastry is a winner to me and your picture is dynamite!

Mmmmm...they look so good. I LOVE Rugelach and it's always hard to find a good recipe. Thanks so much for sharing yours!