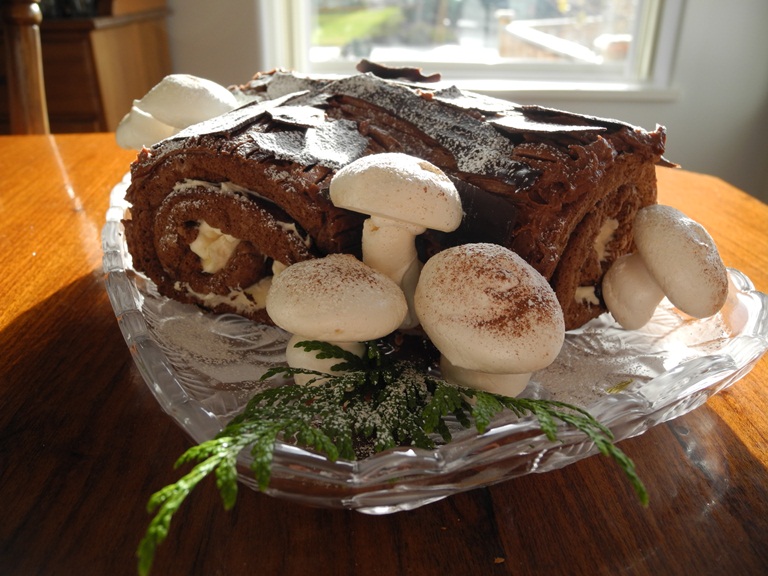 I found this recipe many years ago - in the early 1990s I believe, in a Good Housekeeping magazine. It's become a tradition around here - usually for Christmas Eve. This year, since we'll be celebrating with our family on Boxing Day, the 26th of December, I'll serve it then.

It freezes very well and is not at all difficult to make. The icing is a cooked one, made with flour, sugar and butter, and not overly sweet - a good thing around this time of year.

Combine the flour, cocoa powder and spices. Sift together.

Beat the egg whites and cream of tartar until stiff peaks form. Set aside.

In large mixing bowl, beat the egg yolks with the 1/2 cup sugar until thick and lemon coloured. Fold the whites into the yolks. Fold in the flour mixture, and lastly, the melted butter. Spread in prepared jelly roll pan.

Bake 10 minutes. Turn out onto a tea towel that has been dusted with icing sugar. Peel off the waxed paper. Roll the hot cake up with the tea towel. Cool.

Stir together the sugar and flour. Whisk in the milk. Cook over low heat until thickened and bubbly, whisking constantly. (I do this in the microwave to prevent burning.) Cool completely. Melt the chocolate and set aside.

In large mixing bowl beat the butter until fluffy. Gradually beat in the flour mixture. Add the brandy and vanilla. Beat until light and fluffy. Spoon 1/2 of the mixture into a separate bowl. Use it to fill the cake roll. To the other 1/2 of icing, add the melted chocolate. Use it to ice the cake roll.

To fill and ice: Unroll the cooled cake. Spread the white icing over the cake surface. Reroll. Cut off one end of the cake roll at an angle and place it against the remaining roll to resemble a tree branch. Cover the cake roll with the chocolate icing, leaving the ends uncovered. To create the bark effect, draw a fork through the icing.

Decorate with holly. Slice to serve. It can be frozen, then well wrapped until needed.

The Small Fabric Of My Life said...

This looks divine.
I think I will have a baking day withmytwo youngest day.
I wish you a Happy Christmas with all of your family- and a wonderful 2011.
Jane x

This is one of my favorites Lorrie.

Just beautiful! May you create many wonderful memories this holiday season.

Christmas blessings to you!

One of my favorite last Christmas.I came across your site from the foodieblogroll and I'd love to guide Foodista readers to your site. I hope you could add this buche de noel widget at the end of this post so we could add you in our list of food bloggers who blogged about recipes for buche de noel,Thanks!


We bumped into your blog and we really liked it - great recipes YUM YUM.
We would like to add it to the Petitchef.com.

We would be delighted if you could add your blog to Petitchef so that our users can, as us,
enjoy your recipes.

Petitchef is a french based Cooking recipes Portal. Several hundred Blogs are already members
and benefit from their exposure on Petitchef.com.

To add your site to the Petitchef family you can use http://en.petitchef.com/?obj=front&action=site_ajout_form or just go to Petitchef.com and click on "Add your site"