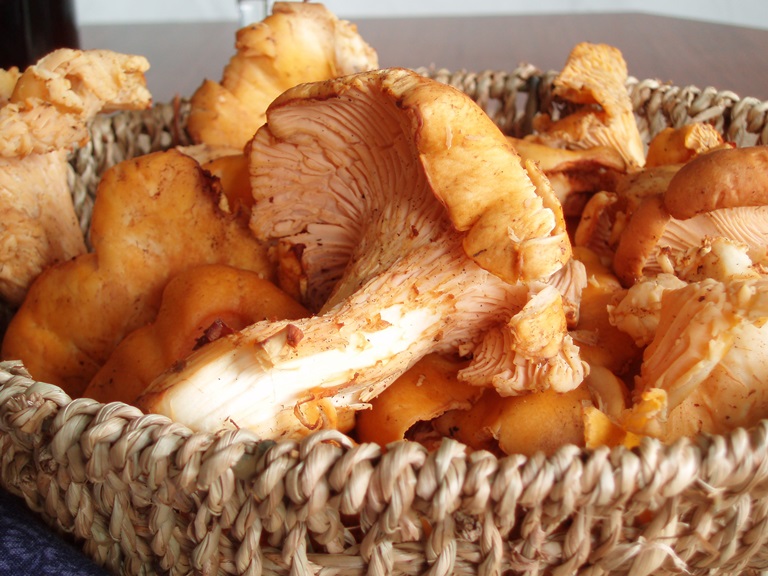 It's chanterelle mushroom season here on Vancouver Island. Cars and trucks parked alongside the highway in uninhabited locations usually mean that someone has entered the forest to find their secret location for mushrooms. These secrets are closely guarded. Mushroom picking can be a lucrative business.

I came by these chanterelles in a serendipitous encounter at the grocery store. You can read that story here. They were delicious, a bit of apricot flavor with a hint of pepper and meaty mushroomness.

This is hardly a recipe - just a suggestion, but here goes.

Chanterelle mushrooms - I used the amount pictured above. Cleaning them took some time. I wiped them with a damp paper towel and picked all the pine needles and forest debris from them. Don't soak them in water unless very dirty, and then only briefly and just before cooking.

Heat 2 Tablespoons butter and 1 T olive oil in a frying pan until melted and hot, but not brown. Add the sliced mushrooms. Stir briefly, then let them cook over high heat. They will release a lot of liquid. Keep cooking them until the liquid is mostly evaporated. They will have shrunk considerably.

When the liquid is gone, pour in about 1/4 cup cream, and 2 cloves of garlic, minced. Stir and boil for 1-2 minutes until the cream thickens slightly. Just before serving, add a handful of chopped parsley and a squeeze of lemon juice.

Mmmmn. I served them over salmon fillet and they were delicious!

Bonjour Lorrie,
This sounds wonderful, I am definitely going to try this. Thank you for coming by to visit and entering the giveaway - now I have found your great blog. I'm a new follower and will be back soon for some more delicious recipes. Infact, I think I will explore a bit before I leave.
Have a good day,
Mimi