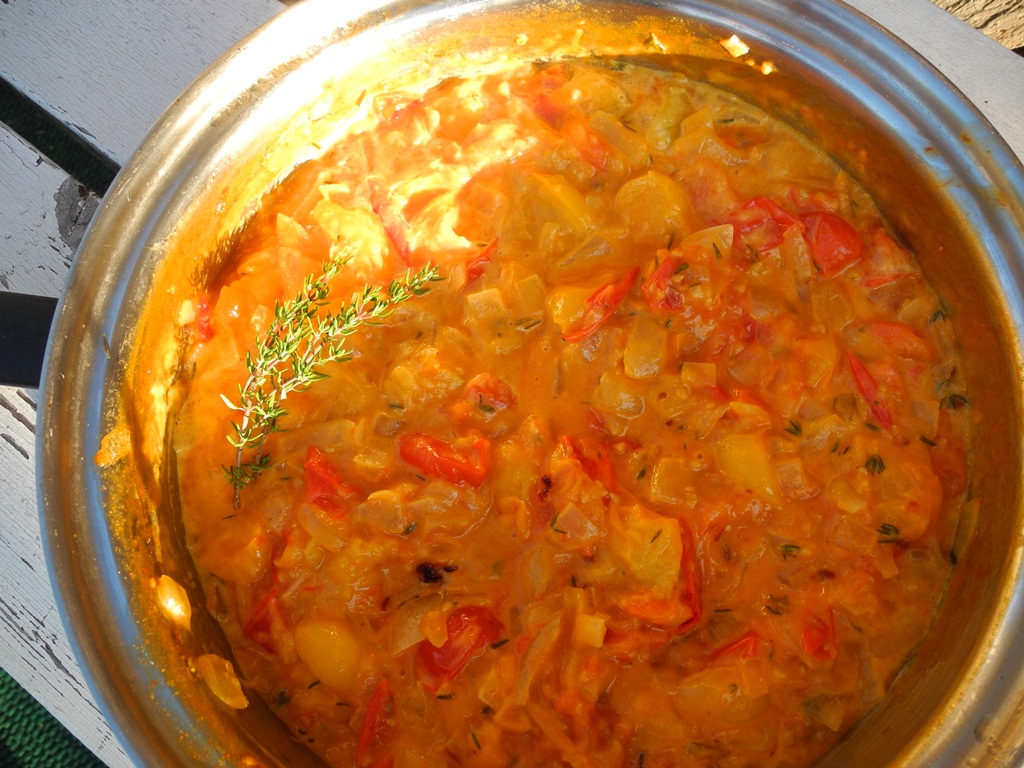 Oh, these were good. Definitely a keeper recipe. We are still using tomatoes from our summer garden. I've had a huge platter on my kitchen countertop since August. Today I put the remainders in a small bowl. Sigh. I do love homegrown tomatoes.

Back to this dish. It's creamy, sweet, savory and rich but not cloying. I served it with a roasted chicken, lemon spinach couscous and steamed broccoli. Ashley said it was like eating candy. There wasn't a scrap left at the end of the meal.

I found the recipe in French Taste, a cookbook by Laura Calder, one of Canada's Food Television stars. The book is from the library, but it might have to go onto my Christmas list because there are so many recipes I want to try.

2 Tablespoons butter
1 onion, chopped (optional)
4 medium tomatoes, halved horizontally (I had smaller ones and just cut up enough of them to fill my pan)
a generous handful of chopped fresh thyme
salt and pepper
1/2 cup heavy cream (I used less, probably 1/4 cup)

Melt the butter in a sauté pan over medium high heat. Saute the onion, if using. Add the tomatoes, cut side down. Poke them a few times with a knife to prevent the skins from bursting. Cook 10 minutes. Flip, scatter with the thyme and cook 5-10 minutes more on the other side, until soft. Season with salt and pepper. Pour over the cream, and reduce to a thick sauce around the tomatoes, about 5 minutes. It will brown a bit and swirl together with the tomato juice. Serve.

I cooked mine longer and at a medium to low temperature. The onions caramelized, the cream turned a lovely shade of brown, and the tomatoes slumped in the creamy bath. Definitely delicious!
Posted by Lorrie at 5:30 PM

Brenda @ Its A Beautiful Life said...

The plan is to try these soon! Alas, no more garden tomatoes, but hopefully I can find some nice ripe ones at the grocery store.

Yummm, thank you for the recipe xoxoxo Clarice